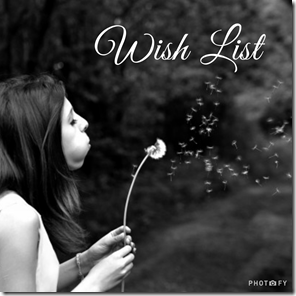 Once a month I am planning on sharing with you all 5 of my biggest wish list books broken up by theme.  I know that you all need more on your TBR!!!  One thing that you find when reading about the Presidents is that there were quite a few that had mistresses!  There is a new fashion for novels being released about these ladies, but I wanted to read some nonfiction about them – and there are a few that are even memoirs!

Past Forgetting: My Love Affair With Dwight D. Eisenhower by Kay Summersby Morgan 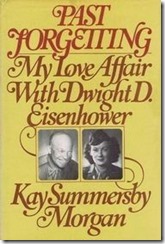 Here, at long last, is the true story of the passionate, moving secret love affair between General Dwight D. Eisenhower, Supreme Commander of the Allied Forces in Europe, and Kay Summersby, the beautiful English fashion model who became his driver in wartime London, his staff aide, by his side through every crisis and high-level meeting of the war -- and the woman he loved.

Written by Kay Summersby Morgan herself, Past Forgetting is the intimate account of a relationship that began, haltingly, in 1942, when Kay was assigned to drive the then unknown two-star general, and ended in heartbreak when Ike, victor and war hero, returned home to face a disapproving General Marshall, the adoring American public, Mrs. Eisenhower -- and the possibility of becoming President of the United States.

Yet Past Forgetting is never a bitter or malicious book; it is the story of two people deeply in love, sharing together the great experiences of the Second World War. Here are intimate accounts of Ike at play and at work; raging against Field Marshal Montgomery; displaying his famous temper against Patton; occasionally revealing to Kay the lonely responsibility of a commander who must send his men into battle to die, and sharing the tense hours before D-Day in intimacy with Kay. Here too are portraits and memories of the great men whom Kay met at Ike's side -- Churchill, Roosevelt, King George VI and De Gaulle. Kay Summersby Morgan has a perfect gift for intimate detail, an eye for men, places and events, total recall and a marvelous wit.

Above all, this is the true story of two people in love, snatching a few moments of happiness in the midst of the cares of war and command. The Eisenhower who emerges from these pages is a man of charm, wit and passion, deeply affectionate and loving, torn between his loyalties at home and his love for Kay. More than a document, this is a beautiful, powerful love story.

The President's Daughter by Nan Britton 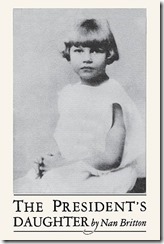 The President's Daughter, America's first major kiss-and-tell political biography, caused a sensation when it was published in 1928. Nan Britton described her six-year affair with the late Warren G. Harding, most famously including trysts in a White House coat closet. President Harding's paternity of Britton's daughter Elizabeth Ann, born in 1919, was proved by DNA testing in 2015.

Once Upon a Secret: My Affair with President John F. Kennedy and Its Aftermath by Mimi Alford 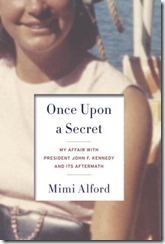 In '62, Mimi Beardsley was a naive teen, a product of her class & time. She'd attended the same exclusive girls' school as Jackie Bouvier, now installed in the White House as the first lady. Which is also where Mimi found herself, as an 18-year-old intern. JFK's White House was a place for which she wasn't remotely prepared, dominated by the charismatic & sexually rapacious figure of the president. Within four days, they'd started a relationship.

There are several extraordinary things about Mimi's story. One is that she'd evaded notice from any of the biographers of JFK & other chroniclers of the heady days & sexual shenanigans of Camelot. Only by chance did a reporter in 2006 follow up a mention of her name in a JFK book, & doorstep her--a married NY grandmother--to find out whether she was the Mimi Beardsely mentioned in a passing reference. This is all the more surprising given the length of the affair--18 months--& the fact that it was ended only by his death.

Mimi Beardsley Alford has decided, after decades of silence & reflection, to tell her story. This is not just a memoir of a young woman of her generation & class coming of age in the 60s, & her relationship with JFK. She also examines the significance it had in her life & relationships since, why she chose to be silent for so long & why she feels this is the time to speak out. 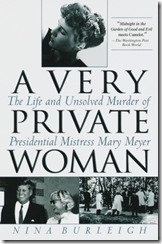 In 1964, Mary Pinchot Meyer, the beautiful, rebellious, and intelligent ex-wife of a top CIA official, was killed on a quiet Georgetown towpath near her home. Mary Meyer was a secret mistress of President John F. Kennedy, whom she had known since private school days, and after her death, reports that she had kept a diary set off a tense search by her brother-in-law, newsman Ben Bradlee, and CIA spymaster James Jesus Angleton. But the only suspect in her murder was acquitted, and today her life and death are still a source of intense speculation, as Nina Burleigh reveals in her widely praised book, the first to examine this haunting story.

The Harding Affair: Love and Espionage During the Great War by James David Robenalt 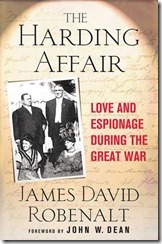 Warren Harding fell in love with his beautiful neighbor, Carrie Phillips, in the summer of 1905, almost a decade before he was elected a United States Senator and fifteen years before he became the 29th President of the United States. When the two lovers started their long-term and torrid affair, neither of them could have foreseen that their relationship would play out against one of the greatest wars in world history--the First World War. Harding would become a Senator with the power to vote for war; Mrs. Phillips and her daughter would become German agents, spying on a U. S. training camp on Long Island in the hopes of gauging for the Germans the pace of mobilization of the U. S. Army for entry into the battlefields in France.

Based on over 800 pages of correspondence discovered in the 1960s but under seal ever since in the Library of Congress, The Harding Affair will tell the unknown stories of Harding as a powerful Senator and his personal and political life, including his complicated romance with Mrs. Phillips. The book will also explore the reasons for the entry of the United States into the European conflict and explain why so many Americans at the time supported Germany, even after the U. S. became involved in the spring of 1917.

James David Robenalt's comprehensive study of the letters is set in a narrative that weaves in a real-life spy story with the story of Harding's not accidental rise to the presidency. 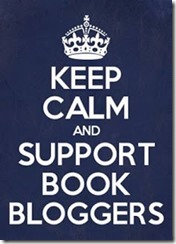