Today I have the opportunity to welcome Johanna Craven, author of The Devil in the Deep Blue Sea, to The Maiden's Court with the next contribution to the Two Sides to Every Story series.  I know it has been a long delay since we had an installment in this series (more ARE coming) and I hope you will enjoy this one.  Today we are treated to a piece about the life in Port Royal, Jamaica.

In the seventeenth century, tiny Port Royal on the south coast of Jamaica was a flourishing trade centre and a notorious hang-out for pirates, privateers and prostitutes. The streets glittered with gold and the taverns numbered one for every ten men. In 1692, the town was destroyed by an enormous earthquake and tsunami that left a third of the city at the bottom of the Caribbean Sea. An act of divine retribution against 'the wickedest city on earth'? Or a tragic end to an island paradise?

Well, that depends on who you ask…

It has been three days since John and I arrived in Port Royal. This is a place of great beauty; clear blue seas and white sands, with a dramatic backdrop of the Blue Mountains. Flowers grow in every colour of the rainbow and fish leap from the sea like firecrackers. A paradise, some would say. But looks can be deceiving, Mary. This place is far from paradise.

Port Royal has a fine harbour and its position in the centre of the Caribbean makes it a perfect base for merchants and naval men. But with these honest seamen have come a despicable crowd of pirates, privateers, and smugglers, all eager to make their fortunes, with no regard for decency. The churches are near empty while the taverns overflow with scoundrels and fallen women. 'The Sodom of the New World', says John. I pity my dear husband for the impossible task he has been given; saving the souls of these wayward people. Indeed, this town is a veritable hell on Earth.

Keep us in your prayers. I shall write again soon.

Edward, my friend, I have found Heaven. A paradise where the liquor flows like water, the streets shine with gold and the women leave little to the imagination.

They welcome privateers here- the celebrations in the street when a ship returns full of French treasure is something to behold. Ah, but don't worry, I've no thought of turning to lawful privateering. Why should I give a share of my hard-fought riches to the Crown?

No, my friend, it is still a pirate's life for me- and men of our sort are welcomed in Port Royal. All right, perhaps it's a stretch to say the governor welcomes us, but he certainly turns a blind eye to our comings and goings. With the sheer numbers of our kind, the poor fool has little choice!

Needless to say, our crew is now using this fine town as a base- indeed several of the men have found wives here, although I fail to imagine what would possess them to give up the lavish life this place offers in exchange for a family!

The drink of choice here is a rum punch we like to call Kill-Devil. Our captain claims the secret ingredient to be gun-powder. Whether to believe him, I am unsure! Either way, the punch has fuelled many a memorable night. I only wish you could join us, my friend.

A man in search of a fine life could do no better than to come to this jewel of a town.

As you know, it has been four years since anti-piracy laws were passed in this Godforsaken town. Four years I've been hoping to see its inhabitants come to their senses; to awaken to the error of their ways.

And yet such wickedness persists. Have these men no fear of the gibbet? The bodies of captured pirates now dangle from Dead Man's Cay, and yet the pirates of Port Royal look to this as a challenge, rather than a deterrent.

Have they no fear of the Lord's wrath? These people will be punished, there is no doubt in my mind. It will be a happy day when Port Royal is destroyed. Mark my words, dear sister, this town cannot stand, but will sink and be destroyed by the judgement of God.

Are you a superstitious man, Edward? I confess that I am, though I'm sure this will not surprise you, me being a seafarer and all.

An uneasiness has fallen over the city. People fear an attack from our enemy is imminent- they see French spies around every corner. But it is more than just the war that has us unsettled. The town was visited recently by a man who claimed to read the stars. Yes, I can imagine what you're saying. A charlatan. Witchcraft. But in the stars, he claimed to see a terrible end for Port Royal. A 'cataclysmic earthquake', he said.

The weather is not helping things. It is steamy and windless, the sea like glass. We've experienced this before, you see. And each time, the eerie stillness brings a shake of the earth.

Thanks to this man's prediction, the streets are now full of self-made prophets: arm-waving madmen with ragged clothes and flashing eyes. Fools, yes, and yet something stops me from casting their words aside.

Something is not right. Out of my window, I see a golden glow in the sky. It is otherworldly and unnatural. I am afraid, Edward. There, I've said it. Against enemy fire, I feel nothing but excitement, but I know I cannot hope to battle the will of a God I've long ignored. Do you think it is truly possible this man saw Port Royal's demise in the stars? Could this be the end? 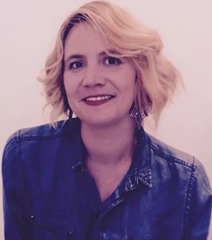 Johanna Craven was born in Australia in 1981 and grew up in Melbourne. As she was finishing school, she agonised over whether to pursue a career in music or creative writing, before finally coming to the (painfully obvious in hindsight) realisation that she could do both. She ended up studying composition at uni, interspersed with writing classes in which she began the story that would become her first novel, Music From Standing Waves.

After uni, she worked a ridiculous number of jobs in order to move to Los Angeles and study film scoring. She loved the energy of L.A. and the incredible experiences it provided: the chance to learn from some of the world's best teachers, a lecture by David Lynch, the chance to conduct an ensemble who had come straight from recording a John Williams score...

After returning to Australia in 2007, she worked steadily as a composer for several years, writing for film, theatre and television both in Melbourne and abroad.

She moved to London in 2011 with her partner and immediately fell in love with the place. She continued work in film scoring, but also began to feel a strong desire to share her own stories with the world, as opposed to helping other people tell theirs. She pulled Music From Standing Waves out of my bottom drawer and self-published it in 2015, before signing with Endeavour Press for her second novel The Devil and the Deep Blue Sea.

When not working, Johanna loves to travel, cook (and eat...) and is passionate about environmental issues, particularly the conservation of the Great Barrier Reef. She loves ghost hunting, dance meditation and is learning to play the fiddle! 1692. The Atlantis, captained by veteran seaman Benjamin Archer, flies the colours of an English merchantman on the high seas between the English Channel and the Caribbean.But she also runs up the ‘jolie rouge’ – the Jolly Roger – whenever the prospect of plundering a Spanish treasure ship presents itself.
Nipping at Spain’s empire is common practice for state-sponsored privateers like the Atlantis at a time when lesser European powers dare not directly make war on Spain.

But when those governments abandon the practice of issuing letters of marque to privateers against the Spanish galleons, many of the crews turn pirate.
Such is the fate of Archer’s men.

The crew is forced to sign the ship’s articles consenting to their new piratical ways, thereby placing their heads in a noose. Unless, that is, they can stage a mutiny and turn Archer over to the authorities in the Caribbean city of Port Royal, a popular homeport for privateers – and notorious for its gaudy displays of wealth and loose morals, the ‘wickedest city on earth’.

But superstition is rife among seamen and the presence on board the Atlantis of two women – one a high-born French stowaway Catherine and the other a Jamaican slave-born ‘cabin boy’ Serafine – will only be a bad omen if they are discovered.

Worse, the runaway is thought by her family to possess the powers of a witch while the ‘boy’ worships voodoo gods who rule life from beneath the waves.
Will the mutiny succeed? What is the secret bond between Archer and Serafine?

And can Catherine escape the captain’s determination to make her his after she has fallen for another young officer?

Is some unstoppable divine force slowly gathering to punish the profane?

Beyond the power and control of man lies what …?